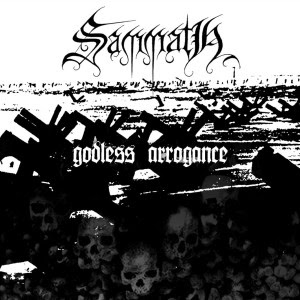 Sammath combines the dark melodic understructure of black metal with the type of charging full-ahead death metal that Fallen Christ or Angelcorpse pioneered (which might descend from Morbid Angel’s “Thy Kingdom Come”).

You will be able to buy Godless Arrogance after its release on February 3, 2014.

Sammath's debut, Strijd, was really beautiful on a melodic level but also very violent and had good use of keyboards (a lot like Emperor done by Morbid Angel). Their next two were uneven but more aggressive. This new one is the best of both worlds.