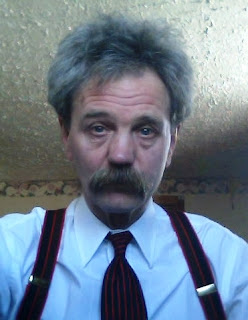 The right-wing is a chaotic place because, since it is underground and beyond oversight, all sorts of bad behavior goes on in the name of "the movement" that is really the result of people who are attracted to the right-wing because they are mentally unstable and looking for a place where they can be outrageous with impunity.

Inevitably, they get caught by law enforcement or go bankrupt, at which point they receive a tempting offer from a federal agent and accept it, and begin a new career as informants.

You can recognize informants by the fact that they have no pursuits in life like jobs or families, they are fanatical, and they get away with saying/doing things that otherwise would cause problems. They get away with it because they are protected by law enforcement.

Naturally, this provoked a response as it was meant to do. Our point was to wake people up to the fact that informants walk among them, and will lure them into doing illegal things so they in turn can be arrested and turned into informants. Many far-right groups are 50% informant. Informants never go to jail.

Part of the response came from Sebastian Ernst Ronin, a Canadian who advocates a hybrid peak oil/white nationalism philosophy that seems to always attract interest from angry people, but never do much of anything. He was formerly of the Green Party but left under a cloud of suspicion.

Since that time, Sebastian Ernst Ronin has attacked several associates of people who write for this blog as a means of achieving retribution. In theory, there was nothing to irk him other than our published information on informants, and the fact that we caught him on Facebook passing on information about right-wing activists and giving that information to known left-wing activists with links to Searchlight and ANTIFA.

By any standard, Sebastian Ernst Ronin is an informant.

He has not stopped his activity. Recently, Sebastian Ernst Ronin has stepped up his harassment of far-right activists and the spreading around of their personal information, including to hostile forces that could have them thrown out of school, fired from their jobs, or just losing friends and neighbors for having un-PC views.

Check out this account by a young activist who experienced the wrath of an unhinged Sebastian Ernst Ronin:

Sebastian Ronin evidently garnered enough support for his organizations, Renaissance Vanguard and the Renaissance Party of North America, that it had seeped into my own friends' inner circle. Two of my friends were keenly interested in Sebastian's organizations: Maxwell Macro from Michigan, and Robert Martin from England.

It was not until their cult-like worship of the man infested my Facebook news feed that I offered a rebuttal to their viewpoints, and Max Macro and I entered the debate arena. Discontented by my inability to budge, Max slandered me, claiming my views were in line with that of liberal universities. My chat logs had conversations where we discussed the pitfalls of our overly globalist, utilitarian economy, so I saw it fit to directly accuse Max of lying. Instead of a rebuttal, he stated he would not tolerate “defamation” of his “reputation” in front of his “contacts” (Sebastian, in particular), who he conveyed were of great importance. Before defriending me, he was publicly adamant that I was indeed the liar, and he was strangely gravely offended that I would call him one. Suffice to say I was confused, but events in the future brought light to his behavior.

Along with all the attention he had garnered, Sebastian also faced increased resistance and dissent from people not too different from me. Rather than forging onward as most political leaders would, Sebastian responded to this internet-based criticism in an angry tone, cursing at his naysayers and calling them names—even slurs involving sexual innuendo. I was not surprised, after witnessing first hand how the man's followers reacted to dissent. What did surprise me was just how restless and infuriated he was toward one group in particular: the parody group “Sabeston Bonin” — a Facebook page that managed about as much traffic as Sebastian’s pages.

In response to Sebastian's visible frustration, Robert Martin sent a Skype group chat log, consisting of me and some friends, to Max Macro just before defecting from the group. Robert was simply angry that the group had commented on the hilarious nature of the Sabeston Bonin page. Max then used this as “empirical evidence” that he knew the perpetrators, and sent Ronin, along with other White Nationalists, the identities and personal information of these persons without their consent. Sebastian also disseminated this info among his cohorts. Keep in mind that I was unaware of this informing and scheming at the time.

Meanwhile, I was over halfway into another semester of college when my parents phoned me concerning an “angry man” who claimed I was mentally ill and “harassing him”. They gave me as much information as possible, despite the man not having given his name. Needless to say, there were enough details for me to presume Sebastian's hand in this. Max's number was still in my cellphone from our long-dead friendship, so I contacted him with questions. He haughtily claimed responsibility and confirmed Sebastian was the caller. He then proceeded to curse at and threaten me, but not after chalking me down for a long list of offenses, such as stalking him and Sebastian with acounts I had no control over. Apparently, he had told Sebastian the same things, including deeming me mostly responsible for the Sabeston Bonin page. In case it is not already obvious: Among those in the aforementioned Skype group, I was their scapegoat, because I was the only one who's real identity, number, and university location Max had.

After facing increased resistance from the “Sabeston” parody page, Sebastian took it upon himsel to call my university, claiming to be a delivery man who needed my address in order to finish his delivery. It was illegal for my school to do this, so they forwarded him to the home phone number in their database. I do not live on campus, so my parents received the call back in my hometown. He proceeded to berate them as if they were the problem, giving them quite the scare. And Max, an appointed leader of the RPN by Sebastian Ronin himself, was behind every bit of it. Sebastian cared not that he had lied to a university in order to illegally acquire a students personal information (I still do not know what they planned on doing with my address.). In fact, I was advised by the school to contact the authorities. If it were not for the multitude of obstacles I faced in my personal life at the time (non-withstanding this fiasco), I probably would have done so.

I have decided to make my testimony public in order to warn others away from Sebastian Ronin and his vindictive gang of acolytes. Last I heard, he is requesting fees and personal information for Renaissance Party membership. Putting two and two together, you can see how his poor handling of personal information can be troublesome for anyone who chooses to become involved with him. I did not choose to be informed upon, but you can.

It's unlikely that he could continue his campaign of posting racially-inflammatory rhetoric without having some problems, especially as he resides in Canada where speech restrictions are stricter than in the USA. However, he magically has no problems, as if he has friends in law enforcement.

That and his passing on of personal information about right-wing activists suggests that Sebastian Ernst Ronin is someone to be actively avoided, as all informants should.

How should we deal with informants? First, warn anyone who is not an informant about the informant; next, pass nothing on to this person except mainstream news articles. Finally, watch to see if you can figure out who else is an informant based on who supports this person.

Hard times require we stick together and exclude those who want to harm us.

Subvert the dominant paradigm, don't be a solipsist.